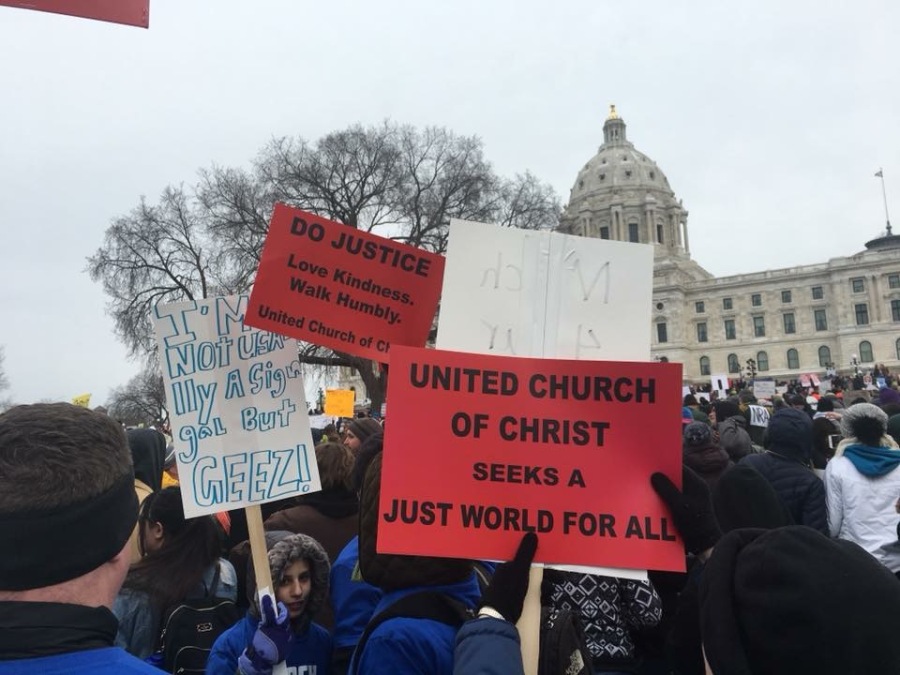 And so, we find ourselves here, after the parade. Palm fronds litter the floor and the steps in front. No longer held up and waving, but following the facts of gravity and now come down to earth. The excitement has passed some by this point, like it did after that high theatrical moment of spectacle when people lined the highways and byways of Jerusalem with a pointed public purpose. It had been a moment of daring clarity and solidarity: the throngs of Jerusalem come together to cry out “Hosanna—save us!” and praise “the one who comes in the name of the Lord—the king of Israel.” Here came Jesus through their midst, riding on a small donkey, in just the way Scripture foretold that Israel’s messiah would come. For good measure and to hail Jesus’ entry, they waved palm fronds—a symbol of victory throughout the ancient world. Here at last was the one to overthrow oppressive Rome, to restore righteous faith, and to set everything right. Anything seemed possible!

The spectacle that day was not so different from yesterday, come to think of it. Children from schools across the country—even the world!—poured into the streets with their families and other supportive adults. They waved signs like palm fronds, and chanted slogans demanding safety. They stepped to microphones everywhere to call for deliverance from gun violence in schools, from the disproportionate slayings of black and brown kids, and from callous legislative inaction. To see the news, watch clips online, and read stories afterwards is to be astonished at their clarity, their bravery and their hope. And afterward I imagine the green spaces and assembly points from Washington DC to Saint Paul to San Francisco now look a bit like this, littered with the aftermath of clamorous public assembly. Leftover reminders that anything seemed possible.

But now what? After the mountaintop, what comes next? When reality sets in, those who march in these parades go home and start to wonder. What good are palm leaves in the face of Rome’s military might? What good are children marching in the face of corrupt politicians and all the money of those who buy their votes? I confess to a cynicism and fear in the pit of my stomach, because massive rallies and witty signs are only part of how change comes. There must be harder work that continues for months and years out of the spotlight: building coalitions around these moral values and changing access to money and votes (the only levers of power that politicians truly recognize or respect). In that context, do these public spectacles simply create the illusion of action? Will they lead to backlash and despair when change does not come after sensational spectacles? What if all the rousing speeches of yesterday (and all those that preceded them) cannot push “con” to “pro”, Congress to progress? What if (in the ancient story of this Holy Week) the savior cannot save as the people who cry “Hosanna!” want him to? What if, in a few days, nothing seems possible?

With the benefit of hindsight, we know what happens after the Palm Sunday procession. The lethal powers work behind the scenes to shut Jesus down. Before we leave today, we hear the words and actions of those in power, crucifying the one who comes in the name of the Lord. The Romans (and the Jewish authorities allied with them) follow a well-trodden course, still used against truth-tellers to this very day. They assassinate his character first, manufacture charges against him, take him in the night, and trot him out for a public lynching. Marches, signs, chants and slogans did not, would not and could not save him. The people realized that they’d been beat, and when a PR campaign against Jesus distorted the meaning of truth itself, most of them turned their backs on him.

This is why I confess some cynicism. If even the Son of God could lose a PR battle and end up on a cross, how long will it be before we buy into the lie already peddled by some, that Marjorie Stoneman Douglas High School teens and so many other youth are crisis actors in an eternal political game around gun control? What will this do to the brilliant teens and preteens of the school-shooting generation? I’m steeling myself already against the disappointment, which makes it harder to feel hope, or the possibility that this time could be different. Here, after the parade, I look ahead with dread.

Thank heaven that God’s ways are not my ways, and God’s thoughts are not my thoughts. Jesus understood that the human heart is fickle and prone to wander. He was prepared for that. I doubt that Jesus took for granted the powers aligning against him in Jerusalem. That’s the reason that even though his soul was troubled, he would not pray for divine rescue from the worst that humans could do. “No,” he says, “it is for this reason that I have come to this hour.” Jesus alone may have known that the greater love of God can transcend even death itself. In fact, through the power of God’s overturning, unimaginable love in him, even death becomes an opportunity for something unimaginably greater.

Listen to the promise of Jesus, as he foresees his own death around the corner. “Unless a grain of wheat falls into the earth and dies, it remains just a single grain; but if it dies, it bears much fruit.” By a wisdom older than time and truer than the grave, love that is poured out in selflessness to others is not lost, but magnified a thousand times over. Even though Golgotha and crucifixion takes place after the Palm Sunday marches, death is not the last word. Divine love will find a way—even through death—into abundant, joyful life once more. When Love is buried in the tomb, it does not remain inert and hidden there forever. No, the seed of love sprouts out of the tomb and grows to new life. It bears much fruit—the fruit of centuries of believers who walk in his loving ways, the fruit of Catherine of Sienna, Mother Theresa, Dorothy Day, Martin Luther and Martin Luther King, Jr. These is not enough time in all the world to tell of the lives which Love has born, fruits that would not be possible had not Jesus remained faithful despite it all, had not his example inspired others like us to give our lives for the cause of love. It is that love and that faith into which Piper is baptized this day. It is the Christian conviction that death is no final end, and Divine Love marches on through it all.

Scripture sometimes speaks of baptism as its own form of death and new life. Each of us who is baptized has been drowned to the old ways of saving ourselves, and has been raised to the promise of heaven, to Love’s eternal way. We are part of the fruit that grows from that planted grain so long ago. Therefore, in this Holy Week ahead, give of yourself too. Give the time it takes to keep watch with Jesus in Thursday’s worship and Friday’s vigil, because he comes alongside those who are suffer the deadly betrayals of life. Let us die to the lesser commitments of our schedules this week at least, persevering as Jesus demonstrates the love that passes all human understanding. Because “unless a grain of wheat falls into the earth and dies, it remains just a single grain; but if it dies, it bears much fruit.” And when the No Greater Love of Jesus Christ arises on Easter morning, however bruised, battered or beaten it has been, Love marches on. This week, come and see! Amen.